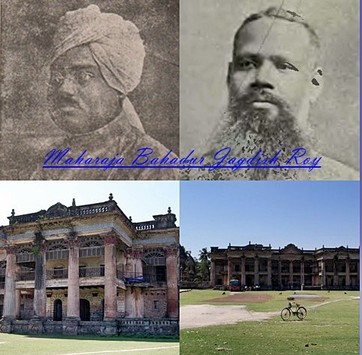 The Dinajpur estate(Presently in Bangladesh ) was repeatedly mentioned in the old records as Havele of Panjara.

Srimant Datta Chowdhury(1608-1642)), who belonged to Kayastha caste and migrated in this area from the east. He had two children, a son and a daughter. The son died without having any issue but the daughter had a son named Sukdhev Roy.

The last Maharaja of Dinajpur estate, was Shri Jagadish nath Roy Bahadur was born on December 28, 1894 at Nulaibari Village, north-east of Dinajpur Rajbari. He started his education at Hindu school and got B.A degree from Presidency College, Calcutta. In 1916 he got married Shrimati Snehalata Devi, first daughter of Shri Nolini Ranjan Singh, Grand daughter of Roy Purnenda Narayan Singh Bahadur, the Jaminder of Bakipur. He received the title of 'Maharaja' on 3rd June 1920 at the Government House in Calcutta . At that occasion his Execellency Lord Ronaldshay (Marquis of Zetland) and then the Governor of Bengal highly praised him his family and stated that this family has been closely connected with the history of the people of North Bengal for many generations.

He also had military training. In the beginning for a few years he was attached to the 11/19th Hyderabad regiment as an honorary lieutenant and later as a Captain.

Maharaja Jagadishnath Roy was chairman of the District Board and Municipality of Dinajpur. As chairman he repaired and constructed several roads and bridges for better communications, trade and commerce. He made available good drinking water for the rural people. For this reason he set up large numbers of concrete wells and tube-wells all over his estate. There was again a great catastrophe in Dinajpur district in 1927-1929. He gave enough relief to save the population. He developed and renovated Dinajpur Hospital and Dinajpur Girl's School. He donated the land and money for construction the building of Dinajpur Mahila Shamiti which is still now exists at Ganeshtala for the memory of his wife Shrimati Snehalata Devi.

He donated lots of money for various purposes. Such as 2000 rupees for the construction of a clinical laboratory in the district, 3000 rupees to the municipality for the purchase of a road-watering motor lorry, 3000 rupees to the silver jubilee Celebration Fund of 1935 and 2000 rupees to King George's Memorial. He made and annual contribution of 600 rupees for the education of poor Kaystha boys. It was said that two charitable dispensaries and some schools in the district were maintained at his cost. Besides these, he donated rupees in the name of Deva seva and cultural progress of Bengal. He was a devotee of Vaishnava of observed all the customs and practices of the family.

In his long political and administrative career he became president of the Dinajpur Landholders, honorary secretary of the Bengal landholders, member and vice-president (for a few years) of the British Indian Association, prominent member of the Bangiya Sahitya Parishad, the Calcutta Literary Society, the Asiatic Society of Bengal and the Bombay Natural History Society. He was elected a fellow of the Royal Society of Arts in 1934. He set up a library at the Rajbadi. He was elected a member of the Bengal legislative Council in 1930. Maharaja Jagadishnath Roy had one son and five daughter. His only son Raj kumar Jaladhi Nath Roy lived only for 16 years. He died in Calcutta on 4th March 1941 after severely affected by Cholera and Typhoid. He was a student of Saint Mark's School in Calcutta for a while. His teacher Ms.A.Stefan could remember him as like " as a pupil the Kumar was good, kind, modest, courteous and considerate. He was really and truly the perfect child. It was such a pleasure to do anything for him. Be assured that his pure and innocent soul is now with God."