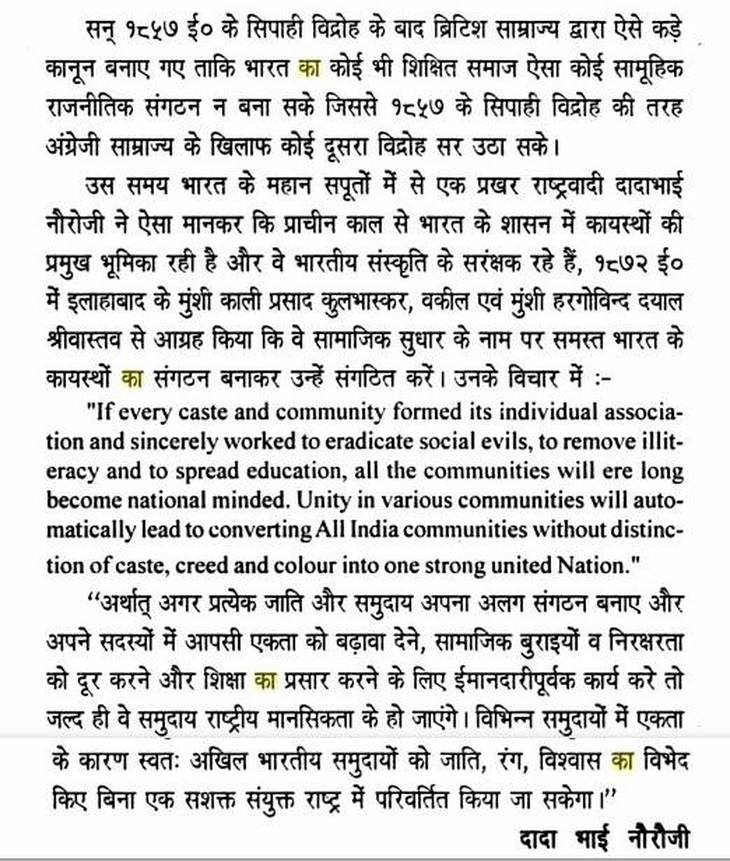 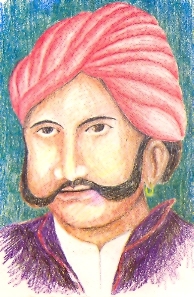 Late Munshi Kali Prasad Kulbhaskar was born on December 3, 1840 at “Chiri Mar Teela which is presently known as Laptan  Ganj of Jaunpur. His father Munshi Deen Dayal Singh, a resident of Shahzad Pur township of Sirathu Tehsil of Allahabad Distict was highly cultured and religious minded person. He worked as “Wasi Baki Nawis” at Jaunpur Tehsil and was posted at Mariyahoo and Machli Shahar also.

Munshi Kali Prasad got his initial education in Sanskrit and his first teacher was Pandit Shitla Din Pandey of Shajahan Pur. At an early age of six he also started learning Arabic and Persian and obtained the degree of “FAJIL”. After successfully clearing VERNACULAR Examination from Mariyahoo, he took admission at Government Normal School of Kashi where he cleared English language examination. In 1857 at the age of 18, he resigned his Government job during the first freedom struggle. In 1858, he was appointed Pargana Visitor of Banaras and worked as Munsarim Banadobast of Pratapgarh, Rae Bareli, Unnao and Lucknow upto 1864.

In October 1864 he appeared in the examination for Extra Assistant Commissioner and cleared it in first division. He stood first in the Advocate examination of 1865 and started practicing law at Awadh Chief Court, Lucknow where in a very short period he earned name and fame. Taluqdar Sangh appointed him its legal adviser and very soon Kali Prasad ji accumulated immense wealth with his legal acumen and court craft. In 1872 he started the publication of “Kayasta Samachar” which continues to be published twice every year even at present.

Munshi ji was married to Sushila Devi, daughter of a very famous advocate Munshi Babu Lal of Sipah locatity of Jaunpur. Being issueless his wife was always very sad and used to be extremely worried about the proper use of the immense movable and immovable properties acquired by Munshi Kali Prasad. She in fact suggested that they should adopt a child. After considerable thought he told his wife that he is going to adopt not one but thousands of children. With an aim of imparting quality education he founded Kayastha Pathshala in 1873 and through a “WILL” he donated his entire movable and immovable properties to Kayastha Pathshala on 18.10.1886. After making this donation he shifted to Delhi where he lived with one of his close friend and left for his heavenly abode on November 9, 1886.

The establishment of Kayastha Pathsala can rightly be termed as the greatest singular contribution of Munshi Kali Prasad ji. In 1873 he started this institution in Bahadurganj locality with seven students and appointed Munshi Shiv Narain Lal as its first teacher. Munshi ji was very clear in his mind that for achieving freedom, mass awakening was the key element for which a solid base for imparting quality education was essential and thus he gave impetus to the freedom movement by founding “Kayastha Pathshala”. Numerous students of Pathshala like Pt. M.M. Malviya and H.N. Bahuguna were in the fore front of our freedom struggle.

Munshi ji was a true democrat and a great visionary. In his WILL he made a specific provision for “Jamaete Muddawaran” (Governing Council) through which the President was to be elected by its members who are known as trustees in a purely democratic way. For the smooth and orderly conduct of elections as well as all the institution he also laid down rules and regulations which are known as “QAWAID”.

He was the inspiration behind the establishment “Kayastha Dharam Sabha” and Lucknow Institute in 1882. He also founded “Upper India Cooper Mill” and “Kayastha Trading Company” and thereby gave a clear message that Kayasthas should not remain confined to the government jobs. He worte “Kayastha Varna Mimansa” (Kayastha Ethnology) and prepared a hand written manuscript on “Sanskar Vidhi”, which is unfortunately not available at present.

In the phenomenal expansion and progress of Kayastha Pathshala, Major D.R. Ranjit Singh’s name comes to the forefront since in 1904 and 1911 due to his missionary zeal and tireless efforts the then Government transferred to the Pathshala huge area of land on which all the institutions run by the trust are functioning at present.

During the Presidential tenure of Munshi Iswar Sharan the grand, beautiful and majestic building of K.P. Inter College was founded and in the tenure of Munshi Harnandan Prasad the College started functioning on Januar 18, 1934. Munshi Har Nandan Prasad is also credited with the construction of Dr. Sampurna Nand Hostel.

Kulbhaskar Ashram Inter College was founded by Munshi Ambika Prasad during his tenure with laudable support from Shri Brij Behari Sahai who was the founder Principal of Kulbhaskar Ashram Post Graduate College also. In 1940 during the birth centenary of Kali Prasad ji, his statue was established in K.P. Inter College and on this occasion Munshi Ambika Prasad invited Nizam of Hyderabad as Chief Guest. During these celebrations the legendary musician Pt. Vishnu Digambar Kashalkar sang for the first time “Jai-Jai Kali Prasad teri Balihari……….” which has become an integral part of the glorious history of Kayasthe Pathshala.

In his Presidential tenure Dr. Pyare Lal Srivastava with active support of General Secretary Late Sri Sarkar Bahadur Jauhari acquired the building of Jamindar Association in 1950 and C.M.P. Degree College started functioning here. Chaudhari Mahadeo Prasad a rich Taluqdar of Allahabad left an amount of Rs.One Lakh in his WILL for a higher education institution of  the Trust with a specific condition that the college will be named after him. Dr. Pyare Lal utilized this money and honored his WILL by naming the degree college as Chaudhari Mahadeo Prasad Degree College (CMP Degree College). Dr. Pyare Lal was an educationist to the core and during his Presidentship K.P. Nursery School and K.P. Convent School were also founded.

In 1970 Chaudhuri Shri Nath Singh was elected President and he was followed by Chaudhuri Naunihal singh who constructed a Business Complex at the site of the old bungalow in Lucknow where Munshi Kali Prasad used to reside. This complex was given to Moti Lal Builder on a lease of 90 years with limited right to give it on sub-tenancy. Subsequently during the Presidential tenure of Chaudhuri Amar Nath Singh the palatial Varanasi Kothi where Chaudhuri Mahadeo Prasad lived in the last phase of his life, was allotted on rent to his son. 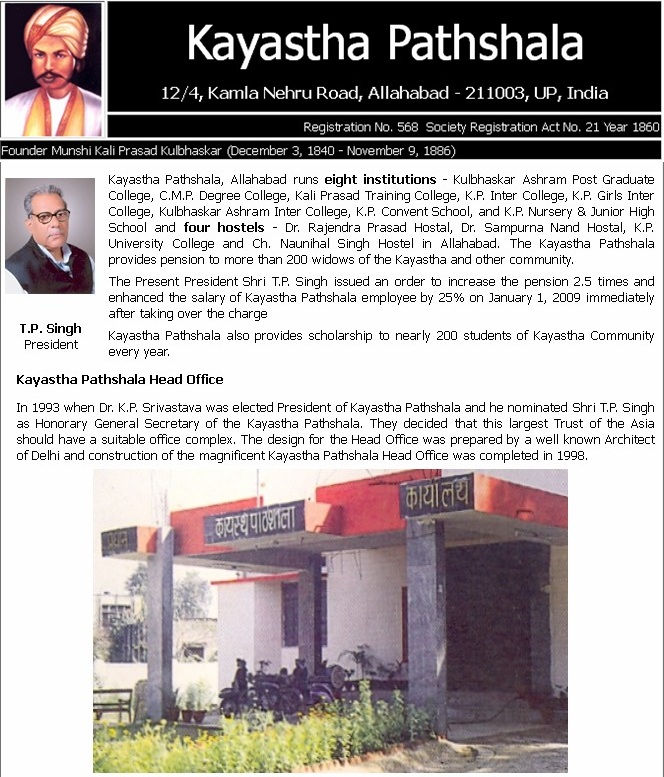 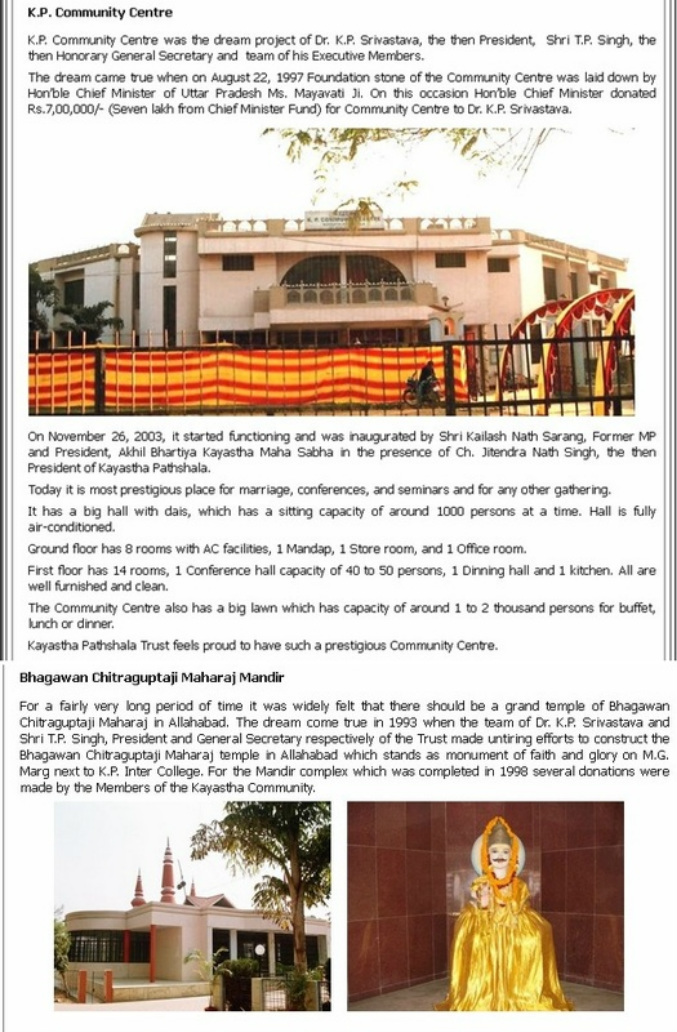