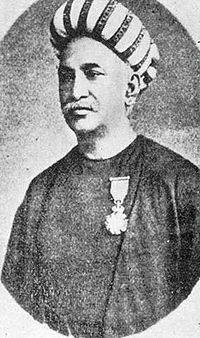 Raja Rajendralal Mitra (1823/24-1891) was one of the makers of the bengal renaissance, the first Bengali to learn and cultivate with distinction the newly emerging science of archaeology, and one of the first few Indians who realised the importance of science and technology in the progress of a people.
Rajendralal Mitra was born in 1823 (or 1824) in a respectable Kayastha family at Soora, an eastern suburb of Calcutta. To understand Rajendralal's achievements in various fields it is important to remember his family background. The family, although it had fallen on bad days, had an honourable background and had received various honours from the Bengal Nawab and later Nawab Vizir of Oudh when the family under Ajodhyaram, Rajendra's great-great-grandfather, migrated there from Bengal after the disaster at Palashi and settled for some generations. The emperor of Delhi also honoured him. Rajendralal's forefathers had literary reputations as well. Both Pitambar and his grandson, Rajendra's father, Janmejay Mitra wrote Brajabuli poems. But what is remarkable is that Janmejay was also a Urdu poet of distinguished standing. Rajendralal was the third son of Janmejay Mitra.