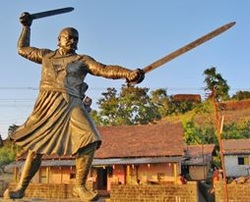 Bajiprabhu Deshpande was born into the CKP caste (Chandrasainya Kayastha Prabhu). From a young age Bajiprabhu Deshpande had a martial spirit in him. In those days India was suffering from the tyranny of the Mughals . Bajiprabhu Deshpande wanted to serve his country and help liberate it from the Mughal yoke. The rise of Shivaji Maharaj gave Bajiprabhu Deshpande the opportunity he was seeking.
For any true Hindu and a lover of Bharath Varsh, the study of Chhatrapati Shivaji's life is awe-inspiring. Over and above being a great and ferocious warrior and in many ways a fore-runner in counter-Jehadi-terrorism in 17th century Bharath, Shivaji was a devoted son to his mother Jijau , a devoted Seeker (Bhakt) of Goddess Bhavani, and a champion protector of the weak and innocent. The daring exploits of this proud Maratha warrior king are extra-ordinary. 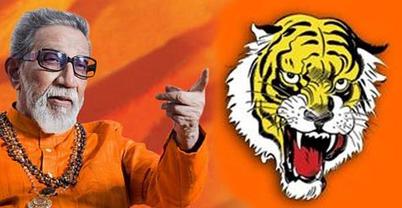 Thackeray began his professional career as a cartoonist with the English language daily The Free Press Journal in Mumbai, but left it in 1960 to form his own political weekly Marmik.[citation needed] His political philosophy was largely shaped by his father Keshav Sitaram Thackeray, a leading figure in the Samyukta Maharashtra movement (United Maharashtra movement), which advocated the creation of a separate linguistic state of Maharashtra. Through Marmik, he campaigned against the growing influence of non-Marathis in Mumbai.[3] In 1966, Thackeray formed the Shiv Sena party to advocate the place of Maharashtrians in Mumbai's political and professional landscape. In the late 1960s and early 1970s, Thackeray built the party by forming temporary alliances with nearly all of Maharashtra's political parties.[4] Thackeray was also the founder of the Marathi-language newspaper Saamana and the Hindi-language newspaper Dopahar ka saamana.[5] He was the subject of numerous controversies.[4] Upon his death, he was accorded a state funeralwith a large number of mourners present.

Thackeray was born in the city of Pune on 23 January 1926[6] [7] and was the son of Keshav Sitaram Thackeray (also known as 'Prabodhankar' Thackeray).[8] His family were Marathi Chandraseniya Kayastha Prabhus.[9] Keshav Thackeray was a progressive social activist and writer who was involved with the Samyukta Maharashtra Chalwal (literally, United Maharashtra Movement) in the 1950s, arguing for Maharashtra to become an independent Marathi-speaking state with Mumbai as its capital. His father was said to have supported the use of strategic violence and the reason his father left the movement was his stance against communists. This is said to have inspired Thackeray and his foundations for his party. 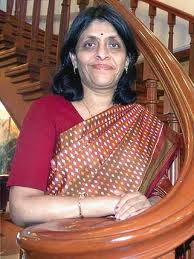 Lalita D. Gupte, Joint Managing Director of ICICI Bank (India’s second largest commercial bank), until October 31, 2006, is an important figure in India’s banking and financial services sector.[1] An INSEAD alumnus, Gupte was listed by the Fortune “as one of the fifty most powerful women in international business.” She is currently the Chairperson on the Board of ICICI Venture and a board member of Nokia Corporation.On 22nd June, 2010 she was appointed as member of Alstom’s Board of directors.[2][3]

Career[edit]Recruited directly from the Mumbai-based Jamnalal Bajaj Institute of Management Studies, Gupte had begun her career with ICICI Ltd (which later merged with ICICI Bank) in 1971 as a trainee in the Project Appraisal department. She served in different locations and capacities, and had played a pivotal role in the listing of ICICI share in the New York Stock Exchange (NYSE) – the first Indian enterprise to be listed in NYSE, and the second Asian Bank to do so. Gupte was made Joint Managing Director of ICICI Bank in 2001, and at the same time was made in-charge of the Bank's growing international operations. In May 2007 Gupte was named to the board of the Finnish mobilephone giant Nokia.

Khando Ballal Chitnis (one of Loyal bodyguard and P.A. of Chatrapati Sambhaji and Rajaram Maharaj)

A B Vaidya / Anant Baburao Vaidya (Chief Architect of Success behind Birla's cement empire, he worked closely for more than two decades with B K Birla, father of Aditya Birla and grand father of Kumarmangalam Birla)

Manohar B Deshmukh, (Ex. MD of State Bank Of India)