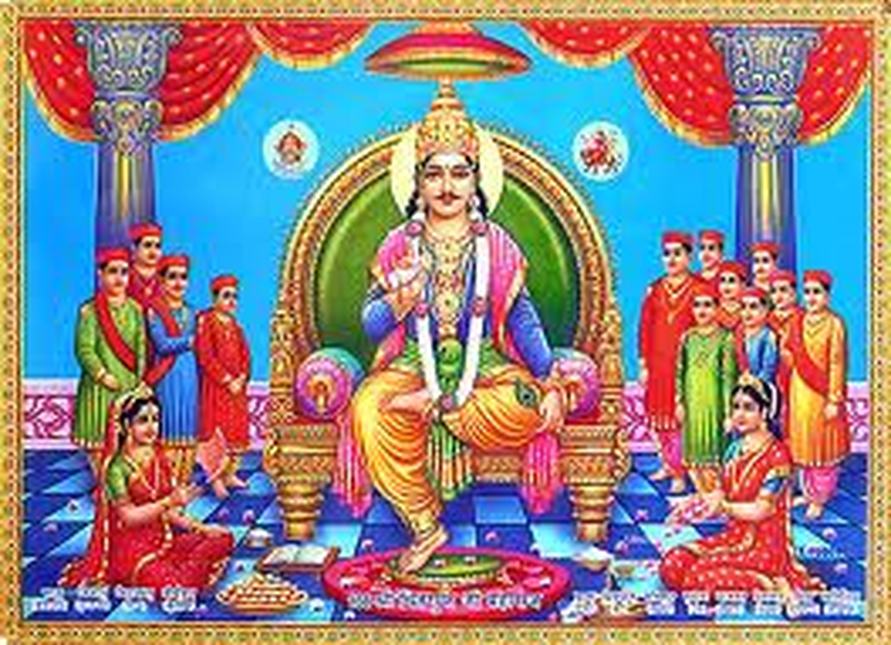 Chitragupta was the king of "Saraswat" (the sub-sect of Brahmins also  inhabiting in Punjab region.)  .  Almighty Chamundadevi gave him a blessing and Chitragupta became the king of Yamapura. When he took over the throne of Yamapura, south direction, people started knowing him by the name of "Chitragupta". Rigvedas call him a great warrior.

Chitragupta’s descendant Chitrarath founded his kingdom in Chitrakuta. Being a "Manasputra" of Lord Brahma, Chitragupta was considered as great king .

Iravati with whom Chitragupta was married. His second marriage was with Shraddhadev Manu’s daughter, Nandini.

Chitragupta had 8 sons form Iravati who is also known as Shobhavati:

7.Himwaan He was a worshipper of Goddess Ambamata and so his descendants were known as Ambashta.
(Ambasht) : In the ancient time there was a kingdom named Ambast which was in between ChandraBahga (Present Chenab river) and Airawart (Present Ravi river).The discussion of Ambast Kingdom was also mentioned in BrahmnaPuran .The residents of this Kingdom was called as Ambasta. Padini was also called the residents of Southeast region of Kashmir as Ambasta.  There people are very brave and fight along with Kauravs in Mahabharath .

8.Atindriya He settled in Nandagram in Bangladesh. He believed in all "kulachar" (hereditary rites of hindus observed in the family), so was known as "Kulsreshtha."

3.Vishwabhanu He lived near Maan sarovar and was called Ashtana.
Valmik : In the central part of the plains of Ganga and Yamuna there was a kingdom named Panchal having capital Kampil which was situated in the south of Ganga .In ancient South Panchal there was Ashram of Valmiki .The Kayastha residents of this kingdom was start staying in the adjoining areas of this Ashram and was great followers of Saint Valmiki. Because of this later on the residents of this kingdom was called as valmeek Kayastha.

4.Virbhanu Having stayed easternly he was known as Valmik.
Kayashtas also include Khare who consider themselves superior.
All sons of Chitragupta got married to "Nag Kanyas" . In Rajtaringini of Kalhan kayasthas are consider as best royal officials.

According to Chitragupta, women should be holy and sacrificing. They are the rulers of Gayatrimanta. They can learn and teach Vedas.

Bhavishyapuranas say the Bhishma Pitamah had got the blessings of "Ichcha Maran" (death at the time desired) by Chitragupta Pujan (worship).

Garud Puranas mention Chitragupta as the king of Yamaraj Puri, who did all the accounting of good and bad deeds of all creatures and who gave them the effect of rotating in the cycle according to their deeds.

Chitragupta got the blessings of Goddness Durga (primeval energy who is worshipped as the wife of Lord Shiva) to be young and immortal till the fourteenth "manwantara" (fourteenth part of the day of Brahma).

Chitragupta had twelve sons who were married to Nagkanyas – it is important to know their names:

It is a great feeling for us that in Bharatvarsha (India) we had great men in chitragupta descendant "Kayashtas" who hold the great position by their peerless and limitless contribution in the development of India. In all "yugas" (ages) from Vedic, Pouranic, in Moghal and British kingdom and independent India, in all high positions, Kayasthas have always been at the highest positions. 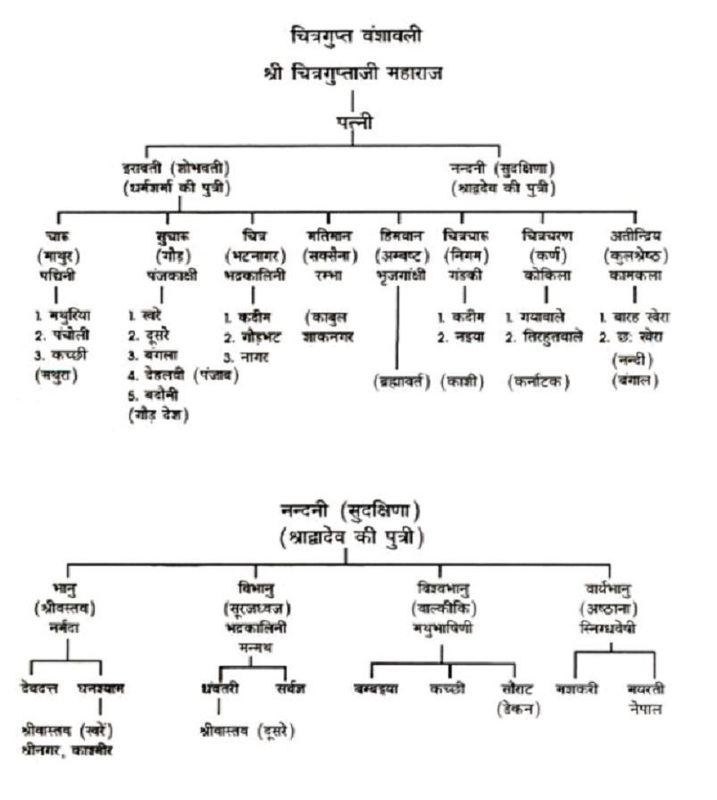 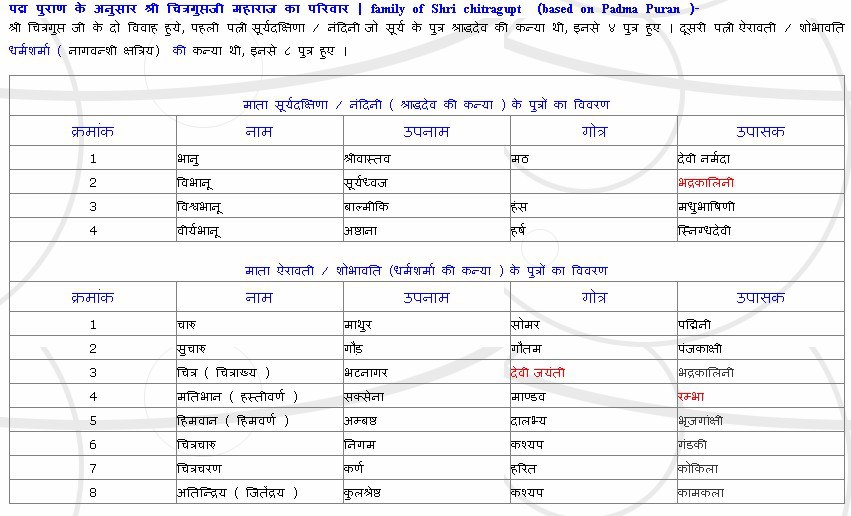